There are some films which make an impact on your conscious mind and this film is all about that. You will think and rethink about the message which this short film gives you.
The film is set in a small village in Madhya Pradesh where a daughter lives with a father. The girl feels the thing around her environment. She is a feeling being not thinking being. She has a heart as big as the almighty. She loves the beauty of love giving. There are some parts of the film which touches you so deeply that you will want to spend more time with your mum.
The film has a spell bounding screenplay and excellent performance from the little girl.
She is the soul of the film. The director has given the simplicity to the canvas as the story was asked by the script. The sound of the film takes you to the village.
Do watch this film whenever it is available for the public.
All the best to Team Mum. 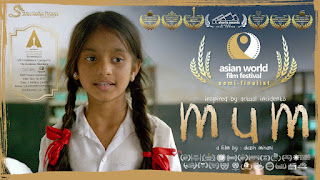 Posted by aryanvisionary at 6:50 AM

Promote Your Page Too